Harry Gregson-Williams returns to Narnia with The Chronicles of Narnia: Prince Caspian

Since last December, composer Harry Gregson-Williams has been hard at work in London, writing his score to the upcoming Walt Disney Pictures/Walden Media’s feature film The Chronicles of Narnia: Prince Caspian. The film adaptation is the next chapter in the saga by C.S. Lewis, and takes place after the events in 2005’s The Chronicles of Narnia: The Lion, The Witch and the Wardrobe. Directed by Andrew Adamson (who directed the first film), with a screenplay by Adamson, Christopher Markus and Stephen McFeely, the movie follows the four Pevensie children as they are called back to Narnia to help Prince Caspian (Ben Barnes) defeat the forces that are plotting against him.

Gregson-Williams began recording his score in late January, where a cycle of writing/recording/mixing took place. This approach allowed him to work with the filmmakers as the edits in the film changed. At the beginning of March there were three days of scoring, and ScoringSessions.com had an opportunity to travel across the globe to attend them at the world-famous Abbey Road Studios, in London, England. 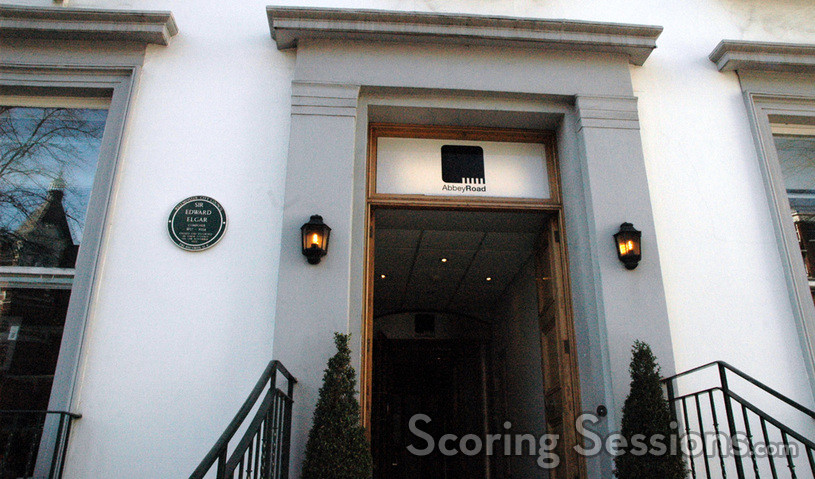 Contracted by Isobel Griffiths and her assistant Charlotte Matthews, an 81-piece orchestra recorded the score, which was broken up into sections for better control. Strings and woodwinds went first, followed by brass; choir and percussion came afterwards. Gregson-Williams conducted all of it himself, with acclaimed scoring engineer Peter Cobbin handling the mixing duties in the control room. 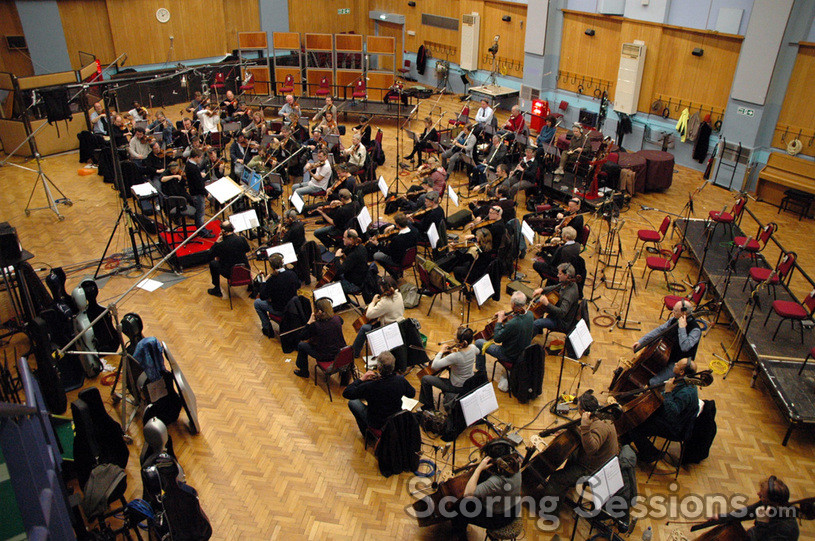 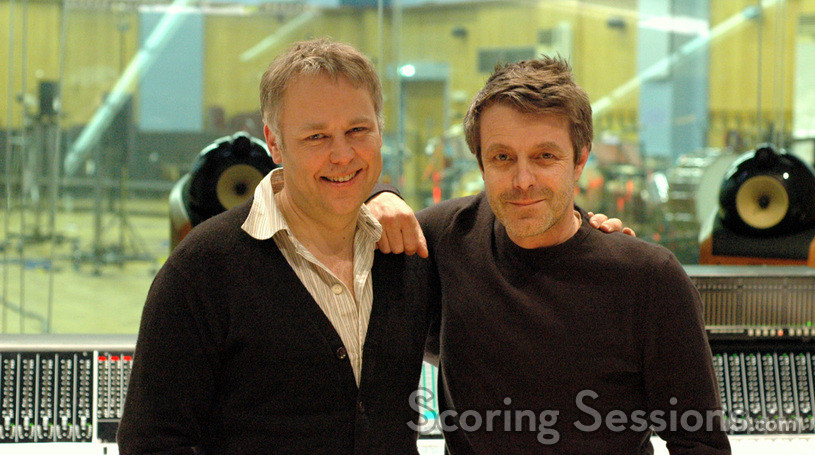 Gregson-Williams would show the musicians the scene they would score, with his synth demos, so that they understood his vision of the music, and the context in which it would take place. Then they would practice and record the cue until they got it just right. The music for Prince Caspian follows the style that Gregson-Williams established for the first film, but due to the nature of this sequel, it’s a bit darker and more aggressive. New themes have been written, and some old familiar themes from the first film also make appearances. 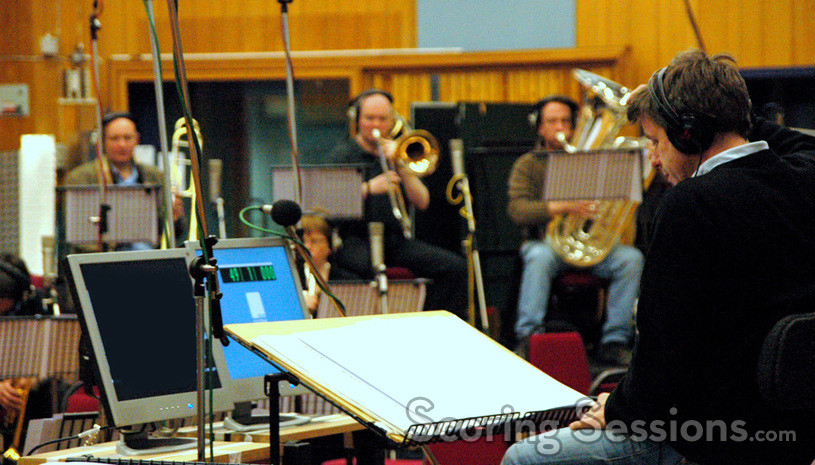 Harry Gregson-Williams with the brass section

The orchestra at Abbey Road 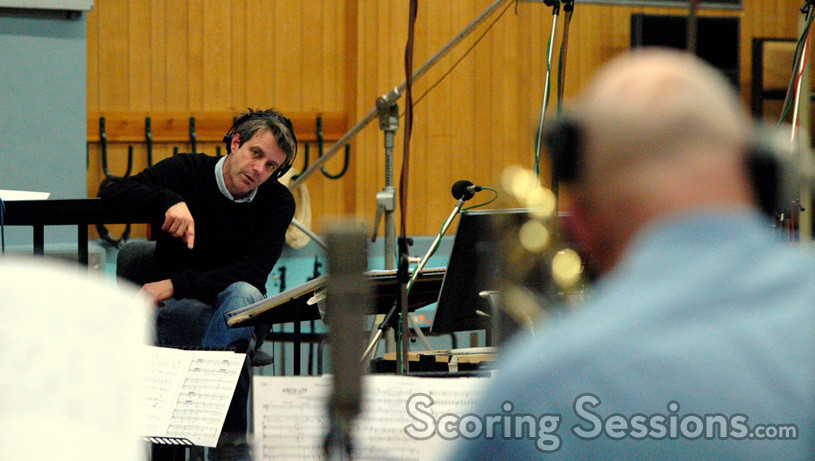 Harry gives notes to the brass

In the booth, music editors John Warhurst and Kirsty Whalley (with Meri Gavin back at Gregson-Williams’ studio) kept track of progress, making sure that the recorded music was fitting properly into the latest edit of the film. Director Andrew Adamson and editor Sim Evan Jones were also at the sessions, lending feedback when needed. Stephen Barton, who also composed some additional music for the film, was handling score reading duties, and being the primary conduit to Gregson-Williams on the stage. 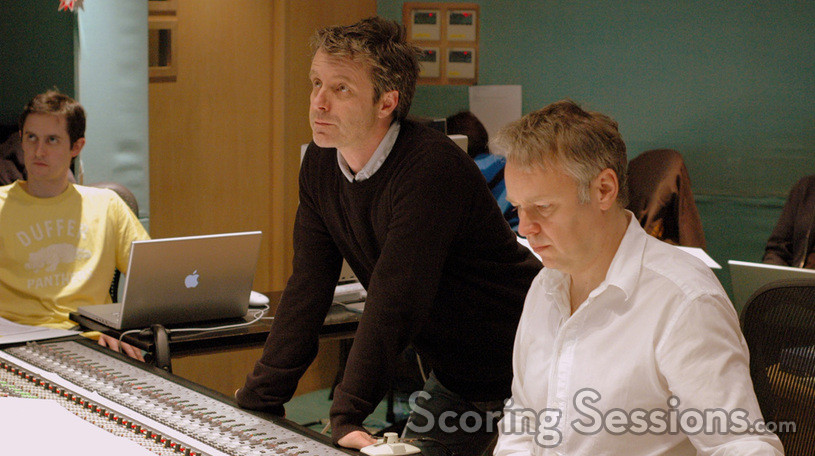 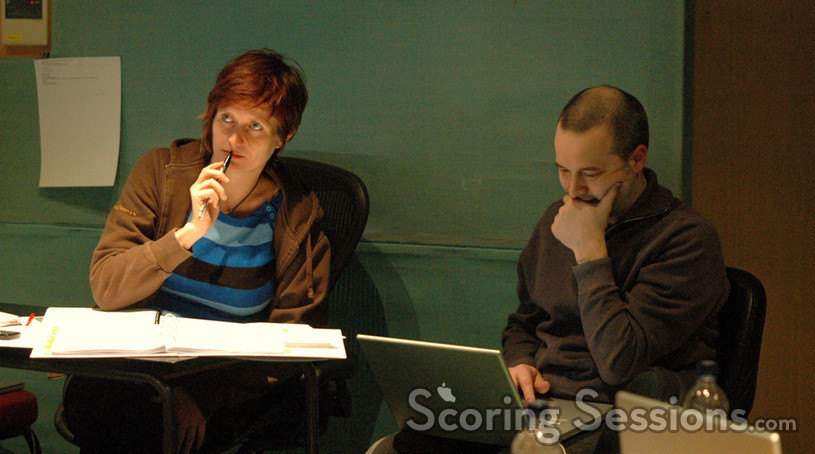 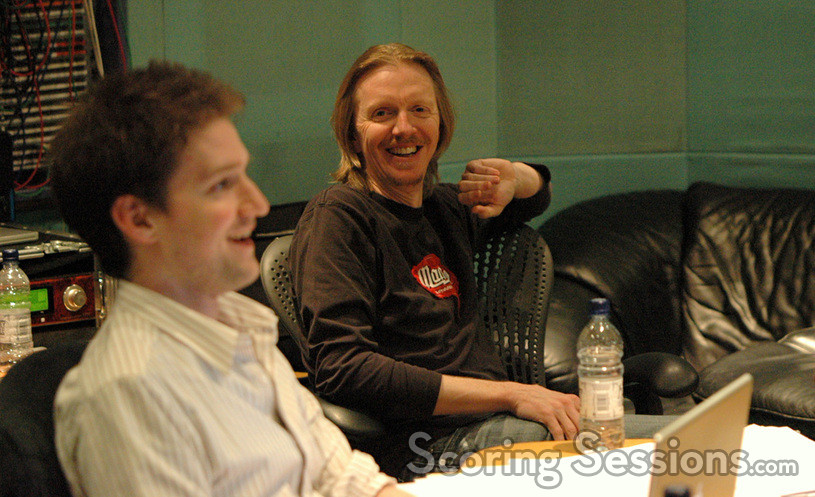 Upstairs in the loft area, where a temporary editing room was set up so that progress on the film could continue as Adamson was at the scoring sessions, the music preparation team was diligently working away. Jill Streater and Richard Ihnatowicz of Global Music Services would take the orchestrated files, conformed appropriately, and print out the parts for the musicians. They would then be handed out downstairs. After recording, the music editors would take the score and place it into the latest version of the film. 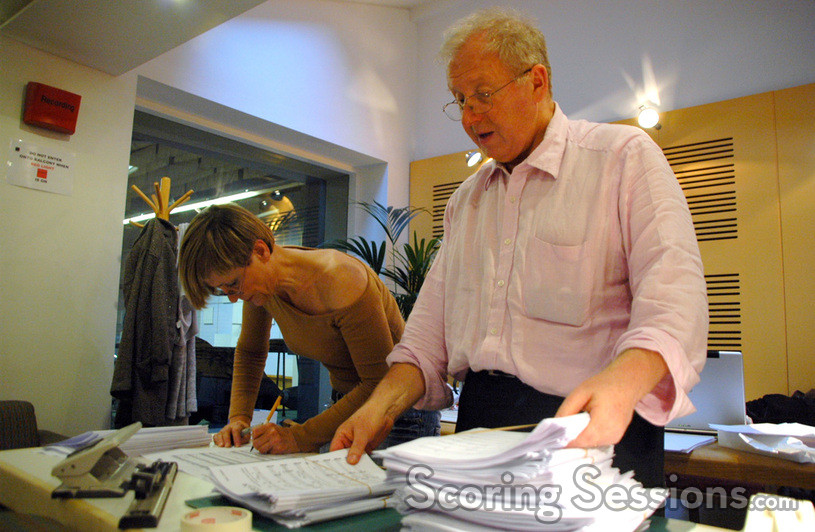 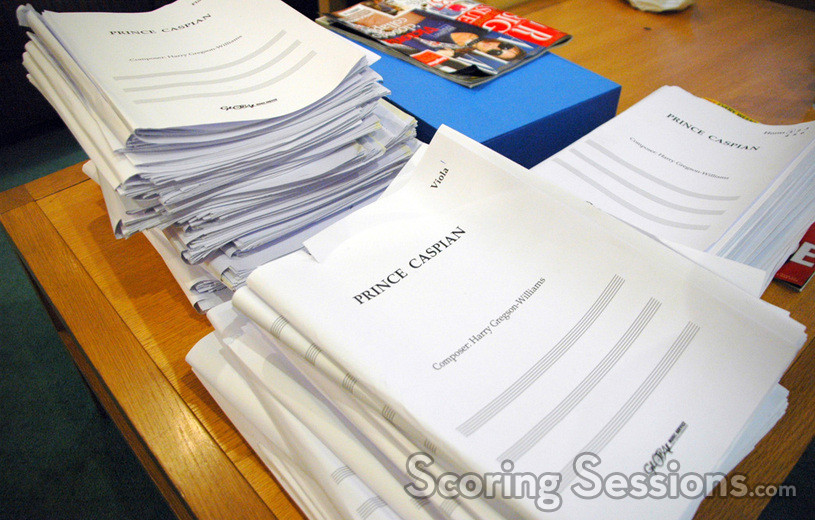 Lots of music parts to prepare!

There are multiple battle sequences in the film, and choir is certainly a featured aspect of the score. Studio 1 at Abbey Road is a large space, with exemplary acoustics. The Apollo Voices, led by Chris Foster, sounded very large in the space, sounding more like 35 people instead of 16. At the end of March, Gregson-Williams will be recording with the 150-person Crouch End Festival Chorus, so it stands to reason that it will sound truly massive! 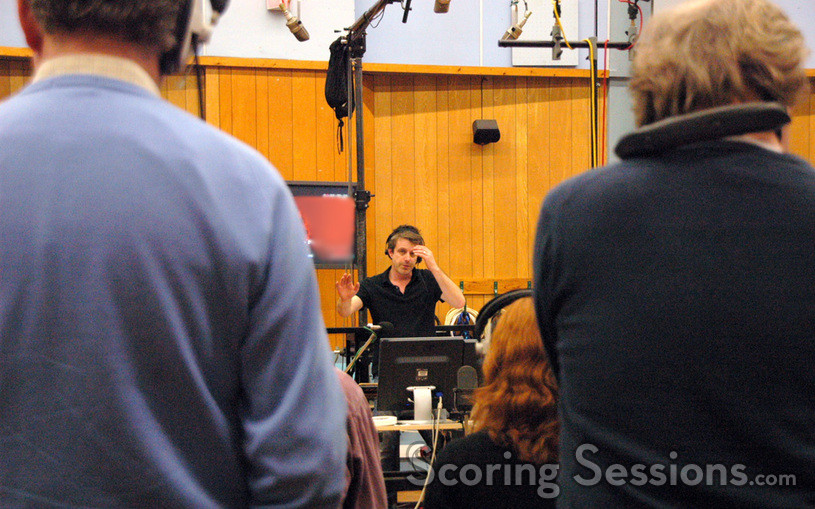 Harry gives feedback to the choir

On the day that percussion was recorded, the "dangerous brothers" were employed: Frank Ricotti, Gary Kettel and Paul Clarvis. Known for their banter and sense of humor, it wasn’t all fun-and-games – they worked directly with Gregson-Williams to make sure he got what he wanted, and they were very focused and diligent. 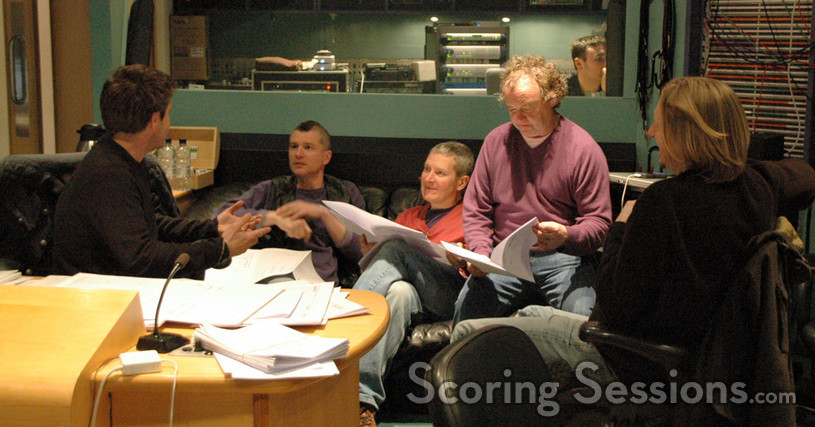 With over two-hours of score, there’s been a lot of work going on to bring the music of Prince Caspian to fruition, employing hundreds of people in two countries over a five-month period. When the film opens on May 16, 2008, people will get a chance to return to Narnia, and hear the next chapter in the musical journey that Harry Gregson-Williams began over two years ago. 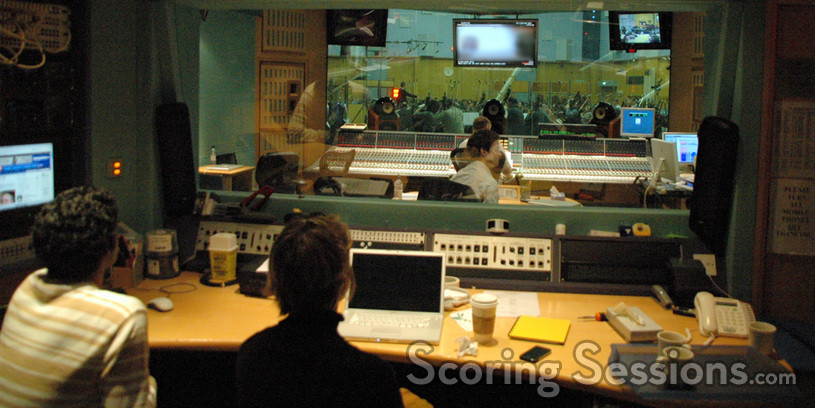