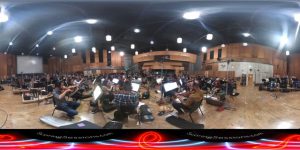 What’s it like to be in the middle of a scoring session? Find out with our exclusive 360-degree video from John Paesano’s scoring sessions to Maze Runner: The Death Cure at the Newman Scoring Stage at 20th Century Fox! Filmed November 8 & 11, 2017.

Special thanks to Chris Lane and Areli Quirarte

Check out the video here!